I was lucky enough to be selected as one of the Southern California representatives for the November 21, 2020 Tellebration™ event, a worldwide storytelling celebra-tion sponsored by Naional Storytelling Network. I knew I wanted to tell ‘the Bog Pond’ story. Storytelling popularity waxes and wanes, but it will always have an irresistible charm for listeners of all ages. Just as we know within minutes whether we will make that hoped-for magical connection to the author of a book, so we sense right away if we are going to bond with the storyteller. On the part of the storyteller, creating that resonance and depicting the setting and movement of the story is the result of hard work at least as much as natural talent. But in the past year, the COVID-19 pandemic’s effects, with electronic Zoom meetings replacing live ones, have made things much harder for us storytellers. 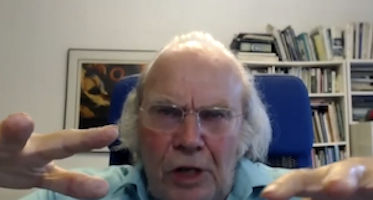 Before 2020 we could look at our audience during live meetings, gauge the faces and reactions while telling the story, and fine-tune the telling as needed. Now, I was sitting alone, in front of a computer screen, in an uncomfortable position, looking directly at a clip-on camera atop the monitor that did not even show as much as a tiny ‘I am working’ laser light, and trying to convince myself that I really believed with all my heart in my facial pantomime show, while chatting with an unseen and unheard audience. It was weeks after the event before I finally saw myself telling the story on screen, and when I did, my reaction was: ‘Man, relax, smile, it is a good story! Even if the telling is subject to a lot of improvement, show the joy of communicating it and the wonder of experiencing it. And remember why you picked the story.’ One reason is that during my lifetime that ‘bog pond’ story has become the exception instead of the rule; remaining bog ponds have turned into relics. From country dwellers we have become city people. Richard Louv, in ‘Last Child in the Woods’, Saving Our Children from Nature-Deficit Disorder, describes our alienation from the natural world and the physical and emotional effects that has on us.

Children complain that there are no electrical outlets outside. We know that we are barely connected to or realize the effects of our actions on the natural world. For two centuries the world’s people have been contributing to carbon dioxide accumulation in atmosphere and ocean, a little bit at a time, and we still have a hard time grasping that without counter-measures, Global Warming may ultimately kill us—slow or fast, it does not matter. I think that if I understand that possibility, then I have the responsibility to talk about it. I may not be the best spokesman for the environment, there are far better ones, but at the moment we need everybody who can talk about it to do so. We need to show the dangers of our slow world heating if we do not take corrective action. Preparing for the speech, I was wondering if I should mention ‘Drawdown’ at the end, the realistic solutions book: I don’t want to spoil good stories with ‘thou shalt’ or ‘must do’, commands and morals that nag. But I do want to make clear what is going on in nature, and to do so effectively. Most people have no clue, and there is active resistance against spreading this knowledge by people who have a vested interest in keeping things the way they are, even if in the end we all go under. Like I think most of us, I aim to present my stories attractively, list the moral sparingly, tell an occasional fun story for relief, and keep trying to find the magic formula that has the audience moved to tears while discovering the message. In the meantime, I am grateful to StoryMasters for the chance to try. Thank you all for your support, and your storytelling examples. 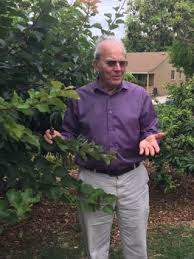 Pieter Severynen, a graduate of both UC Berkeley, California, and the State College for Tropical and Subtropical Agriculture, Deventer, The Netherlands, is the Director of Planning and Design at North East Trees, a non-profit design build firm dedicated to increasing green space and constructing innovative environmental improvement projects in Los Angeles. He also heads his own design and consulting firm, Pieter Severynen Associates, Landscape Architects, Planners and Arborists in Los Angeles, and he teaches classes in pruning and arboriculture.

Prior to his current positions he worked for over 20 years at the US Department of Housing and Urban Development as land planner for the Western states, environmental officer and community planner. He is experienced in public administration; project management, real estate negotiations, land use planning and landscape architecture and is familiar with Southern California demographics, recreation, open space and housing needs.

An accomplished public speaker, he explains and makes of interest to a broad public, a variety of work and interest related issues, including land use planning, international environmental cooperation, urban-rural interface problems, global warming, fire resistant landscaping, rare fruit growing, and sensory awareness. He is also a professional storyteller.