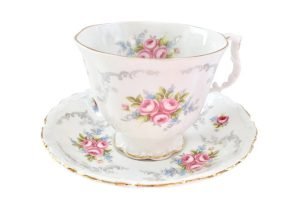 When our plumbing is clogged, we call Rick the Plumber. Before long, our water is running free again.

But, wait a minute! One day, on his way out, Rick suddenly stops.

“That’s Royal Albert,” he says. We follow his gaze to my wife’s teacup collection. He continues, “I have about 900 of those.”

How does a plumber happen to know anything about teacups, much less have 900 of one specific type?

Turns out Rick loves estate sales…and, he sold some of his teacups to Alpine Village Collectibles where I bought that particular Royal Albert teacup for my wife’s collection. In fact, the very teacup hanging on our teacup rack may have been one of Rick’s. What a coincidence.

One day, Rick was doing plumbing for a Japanese-American lady and her elderly mother. The mother was bright, but nearing 100 and a bit frail. She had come to America as a child and lived in Redondo Beach all her life. She said proudly that she had graduated from Redondo Beach High School in 1929.

Rick said,” I have the 1929 yearbook from Redondo Beach High.”

The ladies stared at Rick. The mother’s own yearbook had disappeared sometime in the 80 years since she had graduated.
Rick. said, “I bought it for 50 cents at an estate sale a couple of years ago. I don’t know why. I can bring it over tomorrow.”

The next day, when Rick arrived with the yearbook, the daughter opened it to her mother’s class portrait.

“Mommy, look how pretty you are,” she exclaimed, laying the book in her mother’s lap. The old lady began to cry, and cried more as they turned the pages. The mother was transported back 80 years. The daughter wept to see her mother’s happiness and soon, Rick was crying, too.

Rick left the book with the ladies. Later, he heard they had made enlargements of the photos and hung them on the wall. They sent the yearbook to Japan so family could see it.

A year or so later, Rick heard the old lady had died. He felt good bringing her happiness — and fixing her plumbing.