One winter morning in 2019, the sun came out while it was still raining. Miyo, Tina, and Margaret shared little stories… 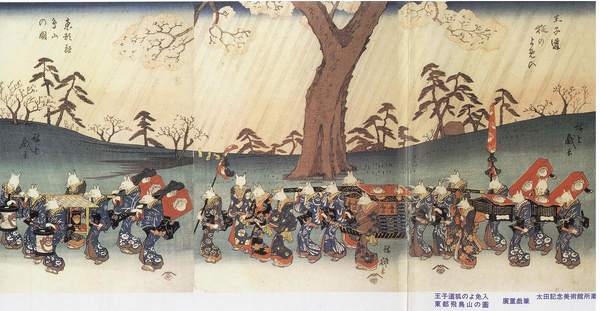 Miyo: Sun shower! We call it fox’s wedding in Japan. There are a couple of different stories, but this is my favorite one.

When a fox got married, she and her family had to go through a village, but they were afraid of being caught by humans. They thought that if it rained, the visibility was so bad that nobody would notice them. They prayed for rain so hard and their wish came true. It started to rain…only over them. People had no idea why it was raining on a sunny day, but thanks to the rain, the fox was able to get married.

Tina: That’s lovely, Miyo! That reminds me of a story my mother used to tell me, about her grandmother. My mother said her mother swore it was true.

It was late summer and the sky had been blue for weeks. The farmers were delighted because they’d had a good hay harvest, and the dry spell would give them time to get the hay baled and into the barn. But Grandma Dixon was very unhappy indeed. Her little kitchen garden was drying up even as she looked at it. She pumped up extra buckets of water every time she got a chance, carried them over to her garden and carefully watered her tomatoes, peppers and sweet corn, but she needed a lot more water than she could carry to keep everything flourishing.

She knelt down to say her prayers one night. “Dear God, You know I can’t pray for rain! My husband and all the other farmers would lose their hay crop. But I just can’t carry enough water to keep my garden alive either. Lord, I don’t know what to ask for. I’m just going to have to leave it in Your hands.”
The next day dawned sunny and warm again. But about ten o’clock some clouds rolled in, and by noon it was looking like rain. All the farmers were outside baling hay as fast as they could, with their anxious faces turned upward, and Grandma Dixon hoped that God would just ignore her ill-timed prayer.

A few hours later the clouds started to break up and blow away, all but one very dark cloud. That little fellow rolled himself right over to Grandma Dixon’s house, sat over her garden, and poured down rain until sunset. Grandpa Dixon and all the other farmers gathered around, marveling, ‘What in tarnation?’ ‘Would you look at that?’ ‘Well, I’ll be!’

Miyo: Thank you for sharing, Tina. It was a treat to read such a charming story in a rainy day and I totally believe Grandma Dixon’s story.

Margaret: Thank you both for such entrancing stories.

My rainy day/fox story occurred about 10 years ago when I was visiting cousins in Surrey, England. It was a whirlwind, one-week visit and they did their best to show me the highlights of the London area in the time we had. It was summertime, but it rained nearly every day, for which they apologized profusely — as though it was somehow their fault.

I enjoyed the impressive sights, but the moment that stands out most in my mind is one afternoon when I sat in the dining room with my cousin and her family. It was late afternoon, and it had been drizzling all day. Her dining room looked out over a backyard garden, much like yours does, Tina. The steady drizzle had lifted, and the sun peeked out.

Much to my surprise, I saw a pretty little red fox trot across their back yard. “Look! A fox!” I called out. Casually, everyone glanced out the window. My cousin’s husband said, “Oh yes, we get them all the time.”

Margaret: No big thing to them, but for me it was an enchanted moment I will never forget.

Miyo: Oh wow! That’s another charming story, Margaret! Thank you for sharing. It’s literally a rainy day/fox story that I didn’t see coming. I didn’t know that foxes are common in England. I would get excited, too, if I saw them.

Tina: With your permission, dear Margaret and Miyo, I’m saving these three stories.  Who knows?—another rainy day we just might remember more stories, and if we  keep putting them in writing, what a wonderful collection it could be!

Afterword:
It’s been almost two years since we had the conversation, but every time we get a  sun shower, we still talk about it. Last Saturday, November 7 was one of the days.  We got sun, rain, and double rainbows! 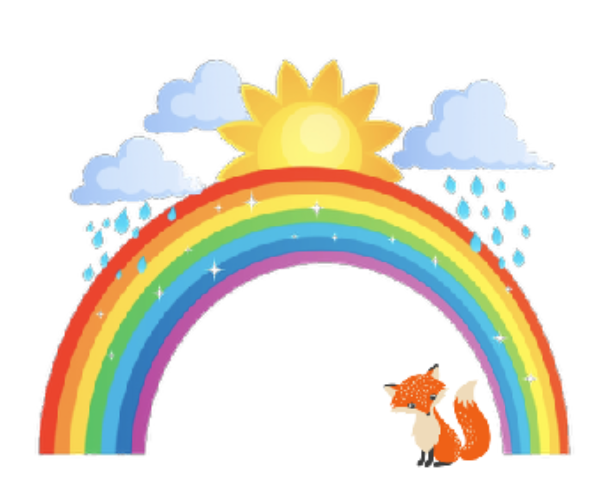