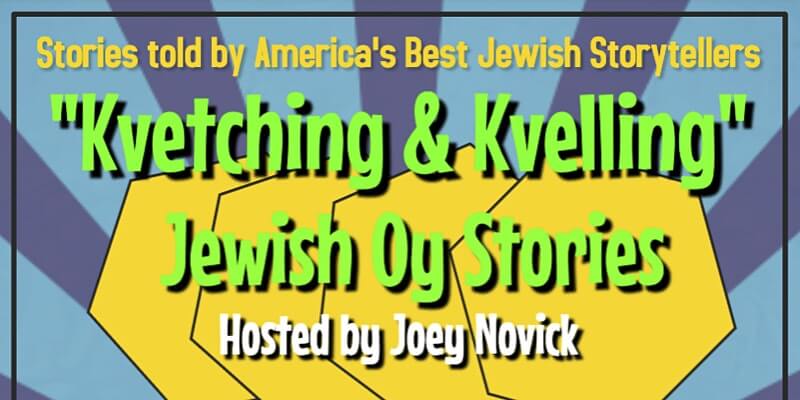 Hosted by Joey Novick
Joey has been a lawyer, an elected official in New Jersey, a bus boy in the Catskill Mountains, a child actor, a camp counselor at the oldest Jewish summer camp in the country, and a professional stand-up comedian. But not necessarily in that order. The New Jersey Jewish News noted that, “Novick offers a kind of loving embrace for the unique dynamics (and dysfunctions) recognizable in Jewish families…”

Zach Lennon-Simon
Zach Lennon-Simon is an award winning documentary and narrative filmmaker who is Brooklyn born & raised. Zach has worked on teaching high school teens how to make their own films and tell their stories to the world. Zach is an avid believer in the power of personal storytelling.

Sandi Marx
Sandi Marx is a seven-time Moth StorySLAM champion. She performed her one-woman show “You’ll Be Sorry” at The Tank in Brooklyn, NY. She’s been featured at the Boston Comedy Festival, Cinderblock and most recently at the “She Makes Me Laugh” festival. Sandi featured on nationally televised PBS “Stories For The Stage” and “Women Of Letters” at City Winery.

Andrea Kaeman
Andrea Kamens tells traditional, original, Jewish, and first-person stories that tremble with truth. Based in Boston, MA, and Zooming everywhere, she’s a host and feature coordinator at The Story Space, and runs a storytelling camp for Artists Standing Strong Together (ASST). Andrea is a mom of 5, who believes all weather is beach weather.

Tracey Starin
Tracey Starin is a writer and storyteller from Queens. She has appeared on RISK!, and Story Collider. She is the producer of Dead Rock Stars and Riding the Rail storytelling shows at QED Astoria, NYC.

Hank Savin
“My style of telling is to share the stories as I feel them, not as memorized pieces,” says Hank Savin. Hank has been a Historical Interpreter and Storyteller at the Mystic Seaport in Connecticut for many years. Described as “a master storyteller” by the New London Press Star.

An evening of fantastic stories by the best Jewish storytellers.