This presentation will be a journey into the storytelling world of the Māori people of New Zealand, where Toastmaster Kingi Biddle descends from. He has been taught the art of storytelling by his elders and he wants to share that with you. This session is a gift from Biddle and his family to you. 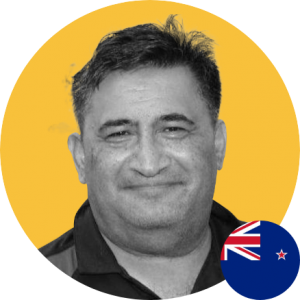 Toastmaster Kingi Biddle lives in his hometown of Rotorua, New Zealand with his family. He can trace his genealogy to that area since 1350 and says, “This means I know who I am, who I come from, and where I belong.” He is proud of the fact that his parents ensured that he and his two sisters have always had contact with his “wider family,” growing up “immersed in a supportive, kind, and loving atmosphere. “

He and his wife, Wendy, have four children and 3 grandchildren, and they consider it a privilege to continue the legacy of raising their loved ones amongst their people. “Living in love with my family and extended family, cloaked with the knowledge of my ancestors, and blessed with friends from around New Zealand and the world, these are my greatest achievements,” he says.

He was a World Championship of Public Speaking® finalist in 2011 and 2013; he became first runner-up in 2013. He has spoken to audiences throughout Toastmasters International in places such as Australia, Oman, Dubai, and China.